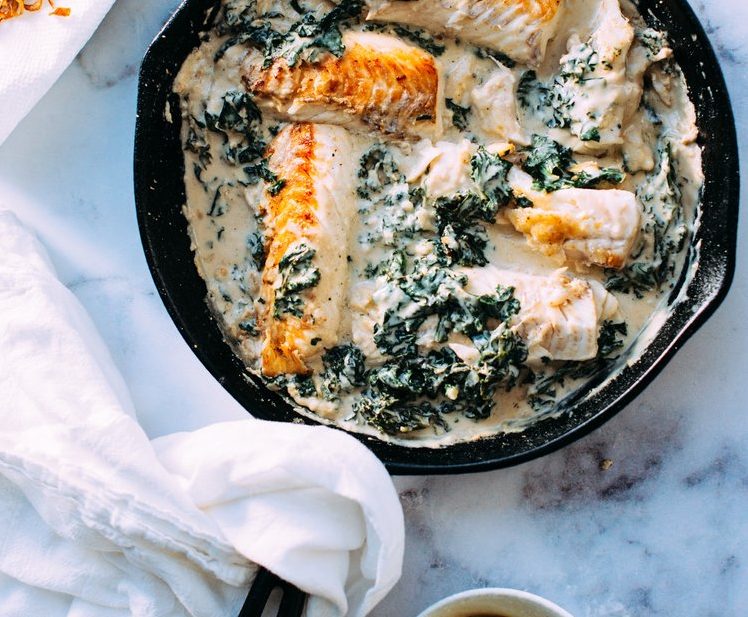 My cast iron skillet is my ride or die. It’s by far the most durable pan I have in my kitchen. And, if you have one, too then you know exactly what I’m talking about. These babies are built to last; like a Ford 150. They are durable. They are resilient. They are made from iron and steel. And, they will outlast generations if maintained correctly.

What makes cast iron skillet’s so appealing is due to the amount of heat they retain.  Once that skillet is hot, it’s going to stay hot — which is great for searing meats to ensure the outside gets nice and krisp-y.  However, cast iron skillets aren’t necessarily great at transferring heat evenly. The area of the skillet right above the burner will get super hot and it will stay HOT, but the rest of the skillet wont necessarily get as hot. So, depending on what you are cooking, you might want to consider warming up your skillet in the oven for about 10-15 minuets so it evenly absorbs the heat before cooking on your stovetop. Just remember to use thick oven mitts when taking it out.

Cast iron pans have a high emissivity which basically means the surface of the skillet emits heat. For example, if you were to place your hand right above the surface of the pan, you’d feel the heat radiating off of it vs. other non cast iron pans you wouldn’t. This makes skillets great for making potatoes, pan frying veggies, or chicken.

Now that we’ve established how they can do now wrong, let’s get to how to care for them. After all, they need to be maintained to make all our favorite recipes like pancakes, and chicken meatballs.

How to season a cast iron skillet

How to season your cast iron

After each meal, you’ll want to rinse the pan with warm water and wash off any excess food with a non abrasive brush (I like this one from Amazon) or even paper towels do the trick. Either way, once your pan is clean, make sure it’s completely dry (they tend to rust if kept in water!), and place it back onto your stove over medium heat. Once hot, remove from heat and put a few drops of oil in the pan. With a paper towel, carefully wipe the pan with the oil to get a nice coating of that ‘seasoning.’

Any cooking oil would work for seasoning your cast iron. However, a vegetable oil, such as canola, works best as it’s affordable and has a high smoke point.

Pro tip: You really want to avoid using a ton of soap on the pan when cleaning as it can strip away the ‘seasoning’ from the pan.

Here’s what not to do with your cast iron skillet

This site uses Akismet to reduce spam. Learn how your comment data is processed.

On Wednesdays we wear pink...cause this is pretty

My bathroom cabinet is starting to burst at the se

So much belly and my tenant still has another 3 mo

A QUESTION FOR THE MOMS, DADS, GRANDPARENTS, CAREG